Will our Love for our Guns Make Us a Police State? 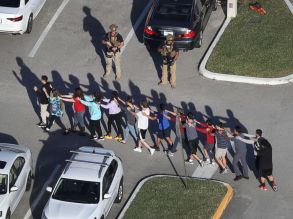 I fear, however, the unmitigated love for weapons, and the ever-expanding “rights” to “keep and bear arms” will make the United States a police state, which is the exact opposite of what gun advocacy organizations want.

Here’s the problem:   as more and more mass shootings occur – such as the latest one in Parkland, Broward County – people will become more and more vigilant for signs of potential crackpots who would go on such a rampage.

On the same day as the Parkland shooting – February 14, 2018 – a grandmother in Snohomish County, Washington, read the journal of her grandson, detailing plans to shoot up a school and kill as many students as possible.  He had even purchased a weapon such as the one used in the Columbine school shooting, robbed a 7-11, and felt a sense of power in that robbery.  The grandmother notified authorities, who arrested the teenager.  During the arrest, he assaulted an officer and now is being held on $5 million bail.  The grandmother is (rightly) being hailed as a hero.

Is that what life in these United States has come to – that we are encouraging people to spy upon and inform upon their family and friends to prevent mass murder?   What will we encourage next – spying on family and friends who might sexually assault others? Isn’t that a noble cause too, in the #metoo movement, especially given the abuses of power we’ve seen with the U.S. Gymnastics Team and people like Harvey Weinstein?  President Trump has accused Democrats of treason for not applauding him during his State of the Union address.  Perhaps we should encourage people to report suspected treason like this too? 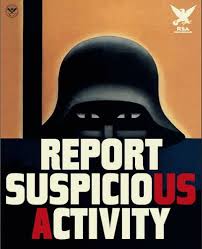 Are we creating a new Gestapo or East German Stasi, where we encourage citizens to report on their family, friends and neighbors?   All in the name of keeping us safe?

No right is unlimited.

The first amendment states “Congress shall make no law respecting an establishment of religion, or prohibiting the free exercise thereof; or abridging the freedom of speech, or of the press; or the right of the people peaceably to assemble, and to petition the Government for a redress of grievances.”

Yet we do require parade permits for people to “assemble”.  We don’t protect people who slander others or falsely accuse them of crimes in public.  Television stations cannot use the “f” word in their broadcasts during prime time.  The first amendment has limits.

Similarly, the complete text of the second amendment is “A well regulated Militia, being necessary to the security of a free State, the right of the people to keep and bear Arms, shall not be infringed.”

Does this mean people can keep and bear nuclear weapons? No.  Can they buy and use 150mm howitzers? No.  Can anyone – including those who are insane or convicted felons – keep and use firearms? No.   Indeed, one could read the second amendment to state that only people who are part of a “well-regulated militia” have the right to “keep and bear arms”.

It sure seems to me that further restrictions – strict background checks, prohibition on any machine gun or automatic weapon, banning of bump stocks and 60 round magazines, requirements for gun safety courses – might well be in order.

I’d rather limit the “right to keep and bear arms” rather than encourage citizens across the nation to be reporting anything suspicious about their friends and neighbors.  I really want my seven grandchildren, ages 1 to 12, to be able to walk to school and learn there, without fear of having the place shot up. And  I’d live in a nation with strict limits on firearms any day, before living in a nation of informers.

– Will we give up our Privacy to keep our Guns?

Although Congress cannot agree on a method to avoid the so-called “Fiscal Cliff” (at least as of this writing), last week both Republicans and Democrats agreed to extend FISA – the “warrantless wiretapping” law.  FISA – really the “FISA Amendments Act” – essentially allows the federal government to eavesdrop on email and other communications without a warrant.  The Senate even rejected amendments which would require some transparency in the process, such as revealing how many Americans are monitored in this fashion.   This same law also gives telecommunications carriers blanket immunity when they turn over records or allow wiretapping of citizens.

On a slightly different issue, the National Rifle Association is reiterating its adamant opposition to the banning of assault weapons or other restrictions on the purchase and ownership of guns, despite the death of 20 young children to gunfire in Newtown.    The NRA supports, however, a national registry of the mentally ill.   And, of course, the Gun Control Act of 1968 prohibits gun sales to individuals who have been committed to a mental institution or “adjudicated as a mental defective.”   Because individual states have a wide variety of laws (or lack of them) which implement this provision, it has few teeth, hence the NRA’s call for the registry.

Recent advances in technology promise unprecedented ability to further monitor and pry into the private lives of citizens.  The law is still murky about the GPS information in your cell phone, but some courts have ruled a warrant is not required for law enforcement to obtain it.   Congress also approved a new law in 2012 which allows commercial pilotless aerial vehicles (“drones”) to populate our skies.  And technology is being developed to allow your TV to monitor your viewing habits, perhaps even via a camera which watches YOU and is embedded in the TV.  This information could be reported back to advertisers and others for further targeting you as a consumer.  Given the FISA extension (which protects telecommunications carriers who turn over information to the government), such data might also be available to government authorities.
(More detail on drones, phones and TV monitoring here.)

Let’s add these new technologies to many which already exist – a proliferation of video surveillance cameras in both private and public hands for example, as well as a massive library of video and still images collected on sites such as Flikr, Facebook, Pinterest and YouTube.   Most such sites encourage “tagging” of individuals by name in the images.  Many private companies are developing facial recognition technology to allow these “tags” to proliferate to images across the Internet.  Governments are also building facial recognition technologies and applying them at least to mug shot databases of criminals or suspects.   License plate recognition (LPR) is now widely used by transportation and law enforcement.  Indeed, between LPR and facial recognition, there might very well be a time when anonymity is essentially dead – whenever you leave your house your whereabouts will be known, tracked and entered into either a public or private database.

Add to all this the explosion of “big data” and “data analytics” such as the Domain Awareness System (DAS) developed by Microsoft for the New York City police department.  DAS and similar technologies promise an unprecedented ability to analyze a vast variety of information about criminals – and citizens – to build a profile of each and every individual in the nation.

Now let’s circle back to the NRA.

At first thought, the idea of a national database of the mentally ill – who would then be prevented from at least purchasing and, perhaps, owning, weapons – seems an attractive thought.  Clearly anyone who would brutally kill 20 first-graders – or murder a dozen theater-goers in Aurora – is mentally ill.  Yet neither Adam Lanza or James Holmes were diagnosed prior to their acts.  In retrospect, almost all perpetrators of large-scale massacres show signs of mental illness, but are rarely diagnosed before the crime.     Some would argue that most cold-blooded murderers (as opposed to those who commit murder in a fit of passion or rage, or under the influence of a drug), are mentally ill.

How do we determine who is mentally ill, and therefore goes into the national database, and is then prevented from buying or owning guns?  Ultra conservative groups like the NRA, who would never support government officials registering weapons, are, apparently, more than willing to allow deep violations of privacy to determine if a person is mentally ill. Do we need to build that nationwide profile of every single person living in United States (or perhaps the world), looking for those tell-tale signs of a killer?  Do we need to put those cameras on every TV in every house?  Do we need to wiretap and analyze every telephone or Skype conversation?  And do we then use our business intelligence and big data analytics to create those profiles?

What’s amazing is not the potential for building such a database, but how far we’ve already allowed it in law, with FISA and the FISA Amendments Act and the Patriot Act and the use of our present technology.  Even more amazing, is the ability of the far right and the far left, the liberals and conservatives, Obama and Boehner, Republicans and Democrats, all to sign on and support it.

We go willingly into this deep, dark night.